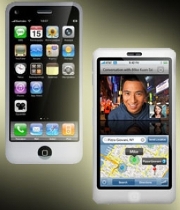 Apple’s much touted iPhone 4 is soon arriving in India . Airtel is launching the smartphone for the Indian market. The company is reported to bring iPhone 4 in the September-October timeframe may be by diwali.

“We are working with Apple. Hopefully, we will launch it in the September-October timeframe,” Bharti Airtel CEO Sanjay Kapoor told reporters on the sidelines of a CII industry conference.

Earlier, Vodafone had said that it would bring the iPhone 4 to India. However, it did not mention any timeframe .

With the launch of third generation mobile services in the country by the end of this year, the sale of such high end devices are likely to get a boost.

US-based Apple Inc, the inventor of iPods, iPhones and iPads, had last month announced the launch of the iPhone 4 with a sharper screen and video-chat features in an attempt to ward-off competition from devices running Google’s Android software.

The Final wait is over and  iOS4  has arrived.Let’s take a close look at what the iOS4 has got to offer for the Owners of iPhone 3GS and 3G.

The new Mail application, offers you to have all your mails from different accounts in a unified Inbox. .The new mail application supports threaded messages ,all the mails sent by one sender with the same subject will be grouped in one thread and clicking on it will open the list of mails within.The best feature I personally liked.It makes your In box so crisp.

Another new addition to Mail Application is it’s ability to open attachments with third party apps. If one don’t have an app which can open a attachment, It will take you to the App Store to download it.So that one can even open and save PDF files in iBooks now.

The new iOS 4  let’s the user to select an image for lock screen,the home screen separately.

The Latest offering in iOS4 is the iBooks,though it  was first introduced for iPad,now it’s offered for iPhone and iPod customers.

iBooks is nothing but the collection of eBooks to the smaller screen devices which will let you read those same books now on a much more portable device. It does have it’s flip slide ,the small screen is not so comfortable to read when compared to iPad, causing more strain on your eyes.iBooks is not a by default App in the new iOS4.After upgrading to iOS4 you have to download it via iTunes.Winnie-the-Pooh, which is free and gets automatically downloaded but not built-in to the app.You can buy a book on any of your iOS 4 devices and then download it again on any of your other iOS devices for free.

You can’t compare it with stanza/kindle.But, still their is lot of scope for improvement with future upgrades.

Pic:iBooks looks like this when you open it for the first time. Photo Credit – Phani Ramadugula

The much talked about feature which Apple has hyped is the “Multitasking” and  finally implemented multitasking in its iOS4. In the old OS, the  apps don’t continue to run when they go in background and merely suspend it’s activity. So with Fast App Switching, the applications will save their state at the point where we suspend it and resume it from the point where it was previously closed. If it’s a game, it will even give you a little countdown before it starts again. The Apps which are compatible  with Fast App switching can only be useful for Multitasking so you need to check for upgrades for the respective Apps.How an app resumes is completely dependent on how the developer implements the feature in his apps. Unfortunately again, the multitasking is not available on iPhone 3G and iPod touch second generation.

This is another notable feature offered in iOS4.This new feature lets you group the apps into a folder rather than searching for them swiping the home screen to find them.You can have folder called “Movies” and pull all your apps related to Movies into the Movies folder making it easier for you to find and use them. All you need to do to create a folder is press and hold an icon until it wiggles and then drag it over another icon which you wish to include in your folder and a new folder with those two will automatically be created. The best part is that the folders are also automatically named based on the category on the App Store from which they come from. So if you slide a Movies icon on another, the folder will automatically be called ‘Movies’.A folder can contain 12 Apps and you can create as many folders as you want. You can even have folders in your dock area.

By the introduction of folders, the number of apps one  can have has gone up significantly. Earlier, one could have 16 apps on one screen and one had 11 screens in total, plus the four icons in the dock which gave  space for 180 Apps, including the built-in ones. Now, one can have up to 2,160 Apps on the iPhone at a time.Folder within a folder not possible.

In the earlier OS it was “End Call” but in the iOS4 it is “End”.Have to see whether it’s a mistake or they have modified it.

Spell Check – This is one more good feature in iOS4.The Spell Check  now automatically highlights an incorrect word and upon tapping it will give you suggestions for correcting .Apart from Select/Select All it also has a add-on Replace.

Camera – You can now tap to focus while recording a video as well. There is also 5x digital zoom available.

Character Count in Messages – Now you can see the number of character counts left when typing in a message.Earllier this feature is not available

Safari -Previously,In Safari the search engines offered are google and yahoo.Now they have added bing , still google is the default.Auto fill for names & passwords and fraud warning when visiting fraudulent websites.

Few complained that while typing,  the first letter  pops up, but then stays stuck as they continue to type. It catches up eventually, but without the visual cues that they’re hitting the right keys, it makes typos an inevitability.Furthermore, opening very basic apps has gotten much slower, and apps crashing to the home screen is much more frequent.

I Personally do not find any reason why a  3G owner should go for an iOS 4 upgrade. As they aren’t getting multitasking,  wallpapers, Bluetooth keyboard support. Expect for  just getting app folders and threaded emails. Other than that, there’s nothing new for 3G owners.But,what i din’t understand is when no major features are offered for 3G in iOS4, why was it made available to 3G’s.Probably to lure the 3G customers for an iPhone 4 Upgrade.Probably,I think this is Apple’s marketing strategy as a good number of 3G customers would go for an iPhone 4 upgrade.

I would like to thank  Phani Ramadugula for contributing the snapshots and inputs for this artcile. Phani Ramadugula is an IT consultant working in US, Internet Savvy and an iPhone Admirer. Will the iPhone 4 live up to its own hype? How does it compare to other popular Android smartphones?

Mashable released an infographic that pits the iPhone 4 against the HTC Evo and the Droid Incredible. (You can view the complete infographic here.)

All three devices feature the same connectivity (802.11 Wi-Fi, Bluetooth 2.1 + EDR), but both Android phones feature slightly roomier touchscreens than iPhone 4. Though the Evo and the Incredible are both equipped with a removable battery (which the iPhone lacks), the iPhone’s internal battery, with 300 hours of standby life, is by far the strongest of the three. The Evo and the Incredible last only 146 hours on standby.

iPhone’s beefy internal storage (up to 32GB) dwarfs the Incredible’s 8GB hard drive and eclipses the Evo’s 1GB hard drive. However, both Android phones boast a microSD slot, which the iPhone does not.

Apple’s App Store is three times the size of the Android App Store, but access to all those apps comes at a price: iPhone customers will pay $299 for a 32GB iPhone 4 ($199 for the 16GB). The Android phones, by contrast, are both priced at $199. Wireless service is also something to consider: AT&T, which has the fastest mobile network in the nation, but is plagued by notoriously spotty service, provides service for the iPhone 4; Sprint-Nextel covers the Evo; Verizon carries the Incredible.

All pictures are courtesy Engadget.

iPhone 4 will be on sale on June 24th. Pre-Orders start June 15th. Shipping will be in 5 countries initially – US, UK, France, Germany and Japan. 19 other countries get it in July 2010.

In August we’ll add 24 more, and in September we’ll add 44 more — we’ll be shipping in 88 countries. This will be our fastest rollout ever

This article is written by Raju.

Raju is the owner and editor-in-chief of TechPP. A proud geek and an Internet freak, who is also a social networking enthusiast. You can follow him on Twitter @rajupp